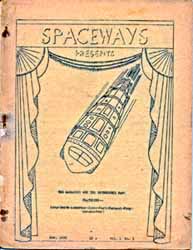 Spaceways was a zine by Harry Warner, Jr. published in the U.S.A.

Beginning in 1939, Jack Chapman Miske (Chaos, Scienti-Snaps, Bizarre) wrote a column entitled "Stardust", which was a regular feature in every issue until 1941.

During World War II Spaceways teamed with Bob Turner's Le Zombie to sponsor the "Fanzine Service" to get fanzines to people serving in the war.