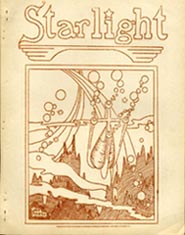 Starlight was published in 1941 in California, U.S.A. Only one issue was released. The cover art was by Jack Fields.

The Futurian War Digest gave it a rave review: "Another trio of editors deserving of commendation are Tom Wright, J.J.Fortier and James Bush of Martinez, California. They have produced a mere 50 page fanzine, using the best possible quality of paper, not to mention a grand assortment of writers and artists. Your Ed nearly had heart failure on taking this copious production from its envelope."

The three editors were also part of the Golden Gate Futurians. The September 1941 issue of Startling Stories carried a letter from Joe Fortier promoting the Golden Gate Futurians and inviting fans to come visit. The September 1941 issue of Weird Tales carries a little ad for the group, listing Fortier as the Director, and proclaims, "We cater to zombies, black sheep, the mentally unbalanced, and even normal fans. Come on—rip our library to pieces, get a membership card, lick our stickers, read our club publication, meet authors, artists, top fans, and amateur editors."

The Fancyclopedia says of them; "Golden Gate Futurians - San Francisco-Oakland local, and core of Starlight Publications. They plugged hard for the 1942 convention, even had a formal invitation from the mayor, but failed. With the real retirement (maybe) of Joe Fortier, they ceased to be much heard, but turned out in fairish number for the Staplecon."

As reported in Futurian War Digest, Joe Fortier was enlisted in the army during WWII and stationed in New York for some of that time, which would have made it impossible for the three editors to keep publishing.

Many years later the Golden Gate Futurians were still in existence; during the 1960s, they assisted Emil Petaya in founding the Bokanalia Foundation to preserve the work of Hannes Bok.