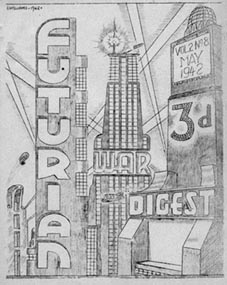 Rosenblum had published two zines prior to this one: The Futurian and Psuedo-Futurian. Futurian War Digest incorporated both of these early zines.

Rosenblum was publishing during World War II against great odds, and is credited with keeping the UK sci-fi fandom community alive and being the main chronicler of events during this time. He was aided by American and Canadian fans; Forrest J Ackerman, for instance, organized fans in the U.S. to ship over unwanted paper to him to print on, since there was a shortage of paper in the UK during the war.

A number of 'firsts' are associated with this fanzine. Many fans released small magazines to be distributed with Futurian War Digest: during the 5 years that the zine was being published, approximately one hundred and seventeen fanzines by twenty one fans were stapled together with the fanzine, creating the first split zine. As well, in Vol 1 No 6, Leslie Croutch is noted for the first use of the phrase "fanzine" in a UK publication.