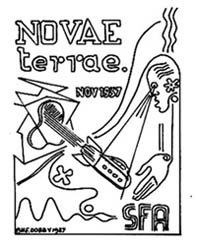 Novae Terrae is a science fiction fanzine published by the members of the Nuneaton, England Chapter (Chapter 22) of the Science Fiction League as their official publication.

Novae Terrae was edited by Maurice Hanson. The first Assistant Editor was Dennis Jacques, followed by Maurice T. Crowley, Arthur C. Clarke, William Temple and Ted Carnell, all at different times. It is credited as being the first UK science fiction fanzine. The first issue was released in March 1936. It was ten pages but began to grow quickly, and by issue nine had more than doubled in size.

After this issue the first SF convention takes place in Leeds at Theosophical Hall, which results in Novae Terrae becoming the official organ of the newly formed Science Fiction Association.

Novae Terrae ran for 29 issues before Maurice Hanson handed editorship over to John Carnell, who retitled it New Worlds and reverted to Vol. 1 No. 1 with the March 1939 issue.

Art work was contributed by Malcolm Plant and later, by Frank Dobby and Harry Turner (Zenith).