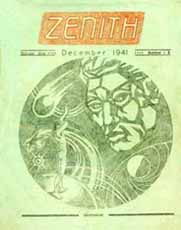 Harry Turner was one of the illustrators for Futurian War Digest and other science fiction zines. Zenith featured his art work, with two and three colour covers. It was a mimeographed and stapled zine. Six issues were released.

The first issue appeared in August of 1941 in Manchester, England. It included contributions from John F. Burke (editor of Satellite and The Fantast), writing on Wells and Huxley; "The Reprint Racket" by Ted Carnell (editor of Novae Terrae); fiction by Maurice K. Hanson (editor of Novae Terrae); cartoons by Arthur Williams (The Science Fantasy Fan; Unique), poetry by C.S. Youd (editor of The Fantast and Fan Dance); and illustrations of Poe by Turner, as well as an editorial page and letters.

Issue two was released in October of 1941, with a rebuttal of Burke's views on Huxley by C. S. Youd; a continuation of John Burke's article from the previous issue; "The History of Pelican Island" by Marion Eadie; verse by Dorothy Morton; fiction by D.R. Smith, illustrated by Turner; and Coleridge lines illustrated by Turner.

A supplement to this issue was released called Hot Air that consisted of letters to Zenith.

Issue 3 arrived in December of 1941 with fiction by D.R. Smith and Don J. Doughty (editor of Tin Tacks); "For Cranks and Fanatics" by Doug Webster (editor of The Fantast and Cthulhu); "The Prospect Before Us", speculative fiction by Marion Eadie; fan news and letters in the "Hot Air" column; and lines from Faust illustrated by Turner.

Issue 4 came in February of 1942, and included "The Awakening" by Arthur C. Clarke (editor of Novae Terrae); verse by Dorothy Morton; fiction by C.S. Youd, John F. Burke, and Marion Eadie; and illustration by Bob Gibson.

Issue 5 was released in April of 1942 with fiction by Marion Eadie; Fandom talk by Ted Carnell and Doug Webster; illustration by Ernest Turner; "The Cliche Expert testifies on SF" by Maurice Hanson; as well as "Hot Air" and illustrations by Turner.

After more than twelve years, Issue 6 arrived in June 1953, edited by Harry Turner and Derek Pickles, editor of Phantasmagoria. Familiar contributors such as John Burke, D.R. Smith and Doug Webster are back, joined by Richard Webb, D. Bryant, A. Vincent Clarke (Science Fantasy News), illustration by Denness Morton and Henry Ernst, and "Tapping the Infinite Will" by Francis T. Laney (editor of The Acolyte).

Zenith was frequently distributed as a split zine with Futurian War Digest due to the lack of resources during the period of World War II. Four small editions of the zine were created for this purpose, usually containing work by Harry Turner and Marion Eadie, who co-edited the fourth issue.