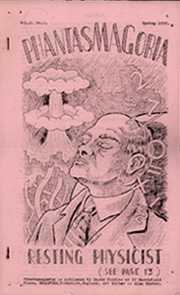 Phantasmagoria was a science fiction and fantasy fanzine by Derek Pickles (1928-2008).

Phantasmagoria was published in Bradford, Yorkshire, England. The first issue was published in November 1950. The next issue appeared in Spring 1951 with #3 following in the Summer. After the success of the fanzine, Mavis and Derek Pickles decided to put on NECON, the North-East Science Fiction Convention, held in Bradford on October 14th, 1951. Issue 4 was released in Spring 1952, and #5 in Autumn of the same year. Issue 6 came in June 1953, #7 in June, and #8 in November 1954, June of 1955 saw #9, and November #10, with the last issue appearing in 1956. Alan Hunter was the Art Editor. Stan Thomas was co-editor of issues 9 and 10.

Mavis and her brother Derek both attended the 1951 Internation Science-Fiction Festival Convention (Festivention) in London and put out a special issue of the fanzine, Phantasmagoria Vol. 1 No. 3, devoted to the goings-on there. It contained convention reports by Walt Willis (Slant), Derek Pickles, and Bob Shaw, including illustrations by Bob Shaw.

Derek Pickles, in Then by Rob Hansen, recalls what happened next; "Phantasmagoria was revived (I'd already published a 'Final Issue'), really, as a one-off after Stan and I attended the "Supermancon" (1954). We were only there the Sunday afternoon and evening, but Stan wrote a po-faced con report -- it was the first and only con he ever attended. The response was amazing: MalAsh, Dave Wood, Ken Potter, and the other Junior Fanatics, and like-minded wrote screaming letters full of utter disbelief that anyone could be so antedeluvian, out-of-touch, heads-in-the-sand, etc. This response stimulated us to publish three more new series Phts, developing the stick-men cartoons and, in our first ish, 'the usual' terms for receiving a fanzine."

The Phantasmagoria of June 1954 was the issue where the idea of "the usual" -- whether it be in the form of a contribution, letter of comment, or a fanzine in trade -- was given in preference to money as the price of receiving a fanzine.

Contributions of poetry came from John Brunner, and Pete Ridley.