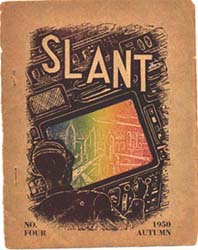 Slant was a science fiction fanzine from Ireland edited by Walt Willis, with art direction by James White.

Slant was first published in Belfast, Ireland in 1948. Willis was unaware of other Irish SF fans at the time, so he devoted his energies to sending his fanzine to North America and as a result gathered a large number of correspondents and good writers for his publication. Gradually he also met Irish SF fans and a group of Irish fans formed. During that time seven issues were published before the last issue in 1953.

In 1951 Shelby Vick, editor of Confusion, started a campaign to bring Willis to the U.S.A. They gathered the funds together and he came to Chicago in 1952. Upon his return he wrote an account of his trip called "The Harp Stateside", which appeared in many installments in various fanzines. This resulted in the Transatlantic Fan Fund (TAFF), which became a tradition in science fiction fandom.

After Slant ended, the next fanzine Walt Willis published was Hyphen.