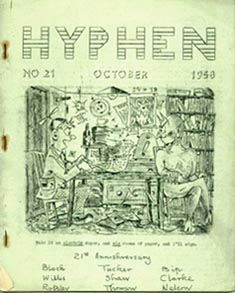 The first issue of Hyphen was published May 1952. It was first intended to fill the gap between issues of Slant, which was being published by Willis and James White. However, over time it became the main title that Willis would publish. 37 issues were released in all.

Madeleine Willis had come up with the title, which was meant to represent the effort to make this fanzine a joint UK - U.S.A. project, with fanwriters and artists from both sides of the Atlantic contributing.

During the 1950s, Hyphen was undeniably one of the most popular fanzines printed, topping reader polls every year. Later fanzine editors such as Greg Pickersgill cited it as a major influence.