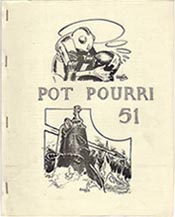 Pot Pourri is a science fiction fanzine by John Berry.

The first issue of Pot Pourri was published in June 1958 in Belfast, Ireland, and it was released throughout the 1960s. It was distributed through Spectator Amateur Press Society. More than fifty issues appeared in the decade it was published, with the final issue, no. 52, coming out in March 1968.

John Berry specialized in humourous fan writing. He recounts in Relapse giving Walt Willis the first issue; "When I gave Willis my first issue he observed, with raised eyebrows and slightly flared nostrils... “Er, John, this is rather a mundane title”. This was a truly wonderful moment for me, but I successfully concealed my emotion. You see, Irish Fandom in the fifties and early sixties was the epicentre of magnificent puns and verbal activity, pure spontaneous wit, and Walt Willis was the guiding genius. But he’d missed this one! Northern Ireland has always been religiously orientated… the title is pronounced ‘po-poor-ee’ (according to my dictionary, anyway). The ‘T’ is silent. Hence, my title was a pun on 'Popery’! Even James White, a Roman Catholic, missed it – or did he? Maybe they collectively chose to ignore my unsubtle word-play, feeling sorry for my effort, an Englishman becoming involved in Irish religious affairs on an international scale."

Skyrack says of Pot Pourri; "Numbers 39 to 43 have arrived in a batch and feature an excellent spectrum of subject matter in an aptly named zine. Again, highly readable..."

John Berry was routinely in the top five of the Skyrack Polls for "Best Fanwriter" every year, and Pot Pourri was often in the top twenty.

John Berry was also one of the editors of the fanzines Ipso Facto and The Damned Patrol.