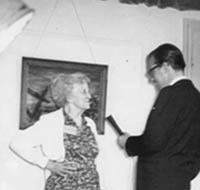 Rory Faulkner, interviewed by the BBC at the 1957 Worldcon in London, England

Rory Faulkner was a science fiction writer and fan, fanzine editor and contributor.

Dorothea M. Faulkner, known as "Rory", was based in Los Angeles, and a member of the LASFS.

In the fanzine No Award #8, Len Moffat writes of her, "When Dorothea M. Faulkner (aka "Grandma the Demon" when she wrote locs to the prozines, Rory Faulkner when she wrote poetry both serious and humorous, and 'Dottie' to her close friends) attended her first LASFS meeting we knew at once that she was Outlander (SF club) material. She was a little old grey-haired lady from Covina and the type of person we used to call a 'pistol'."

Rory began contributing to fanzines in the 1950s. She co-edited one issue of Shangri L'Affaires with Fred Hershey in 1951, but mainly contributed to a wide variety of fanzines in the U.S. and the UK, as well as writing frequently to the letter columns of pulp magazines such as Startling Stories. Her own writing, under the pen name 'Rory Magill', appeared in Spaceway and IF: Worlds of Wonder.

In 1957 Rory attended the Worldcon in London, "Lonconfidential", which prompted Ron Bennett to write in Mimosa, "...there was sixty-something year old Rory Faulkner, who was a charmer. And a Novelty. Sixty-plus year olds just didn't travel six thousand miles to attend conventions, didn't y'know?" At the convention she was initiated into the St. Fantony Order and interviewed by the BBC.

In 2000, her writing was included in Sci-Fi Womanthology, edited by Pam Keesey and Forrest J Ackerman, and published by Sense of Wonder Press.