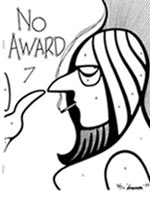 The cover art for issue 7 by Taral Wayne was a parody, featuring a portrait of Avedon Carol, editor of Rude Bitch, Chuch, and Pulp, as if done in the style of Richard Bergeron (Warhoon) as a commentary on the fan feud they were at the center of.

Marty Cantor had previously co-published 27 issues of the fanzine Holier Than Thou with Robbie Cantor in the 1980s.