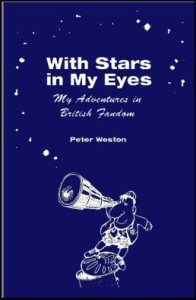 The cover of Peter Weston's Hugo-nominated hardcover memoir With Stars in My Eyes (2004). Cartoon by Harry Bell; design by Alice N S Lewis.

Peter Weston has the distinction of winning the first Nova Award for Best Fanzine, presented in 1973, for his fanzine Speculation. Weston had begun the fanzine in 1963. Weston had released it under the title Zenith for the first six issues, which lasted from 1963 till 1964, unaware that Harry Turner has previously published a fanzine of the same name in the 1940s. Upon discovering this, he renamed the zine Zenith Speculation for issues 7 to 13, between 1964 and 1966. At that time it assumed its final identity, Speculation.

Weston chronicled his early involvement with fanzines and conventions in With Stars in My Eyes: My Adventures in British Fandom (NESFA Press, 2004), which earned him a Hugo Award nomination.