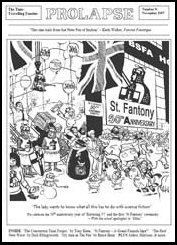 Peter Weston had previously published Speculation and Nexus in the 1960s and 1970s. For his return to fanzine publishing, he originally launched Prolapse in 1983 as an apazine. In 2006, it was relaunched, and featured letters of comment on the previous two issues. With the fourth issue, Weston announced its focus from that point forward would be the history of British fandom. It was subtitled "The Time-Travelling Fanzine".