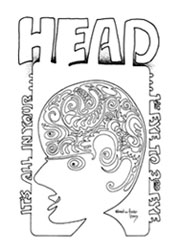 Head has included contributions such as Doug Bell's story "Pil, Pil, I Love You Still", about travelling in Basque Spain and France, and about the Guggenheim in Bilbao; Christina Lake writing on fandom in "Where the Neo-Fans Graze", and on the Eurocon in Sweden, in "Shards of Babel"; "How I Pubbed My Other 'Ish'", on fan publishing for CAMRA, by Mike Meara; Nick Walters, a Dr. Who novelist, writing about meeting his favourite Dr. Who actor; "The Gloves Come Off', an illustrated memoir about ice hockey by Taral Wayne (DNQ); "Medicine Men" by Gary Wilkinson, about art of the last and current century.

Photographs are by Gary Wilkinson, and the editors.

Christina Lake had previously co-edited the fanzine This Never Happens with Lilian Edwards.