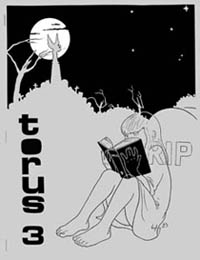 Torus was a science fiction fanzine published by the Kamikaze Editorial Collective.

The first issue appeared in 1986. Eight issues were published, the last one appearing in December 1990.

Issue two appeared in October 1987, at which time Michael Skeet joins the Kollective. This issue features an interview with C. J. Cherryh. The cover is by Taral Wayne (DNQ), and interior art is by Brad Foster.

Issue 3, April 1988 features interviews with Elisabeth Vonarburg and Donald Kingsbury, fiction by Phyllis Gotlieb and fan history from Taral Wayne, who also did the cover drawing. Interior art is by Brad Foster.

1988 brings issue 4, with the editors as Penney, the Soltys and Wallis. Contributors include Terri Neal, Robin Rowland, and Karen Wehrstein. Art work is by Brad Foster and Taral Wayne, and cover art is by Taral Wayne. Featured is an interview with Orson Scott Card.

Issue 8, the last issue arrived in December 1990, and featured a reprint of an article by Ben Bova, and writing by Tony Davis, Candas Jane Dorsey, Phyllis Gotlieb, Terri Neal, and Peter Roberts (Checkpoint). Included is a reprint of an interview with Andrew Weiner by Yoshiyuki Tanaka. As well, the editors reflect on the run of the zine in this last issue. The cover was by Taral Wayne. Letters came from Buck Coulson (Yandro), Mike Glicksohn, Michael Hall (The Monthly Monthly), Robert Runte, Garth Spencer, and Harry Warner, Jr. (Horizons).

At the same time as Torus was being published, Michael Skeet also released the fanzine MLR.