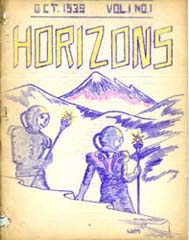 Horizons was edited by Harry Warner, Jr. for more than 60 years.

Horizons was a science fiction zine published in Hagerstown, Maryland, U.S.A. The first issue appeared in October, 1939. Harry was also publishing the fanzine Spaceways, which first appeared in 1938, and Horizons began as his second general circulation fanzine, but after five issues, in mid-1940, it was distributed by the Fantasy Amateur Press Association and continued almost uninterrupted after that. According to Robert Lichtman, in Trap Door #22:

"He missed only one mailing in 1943 due to serious illness and another in the ‘90s because the parcel containing the issue went astray. There was a total of 252 issues, the final one appearing in this year’s February mailing. It’s safe to say that no one is likely to top Harry’s 64-year record of regular publication of the same title."

Horizons was published until Harry Warner, Jr.'s death in 2003. It is believed to be the longest continually published fanzine in history.