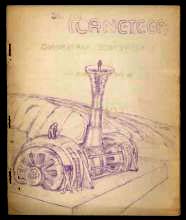 The Planeteer was a science fiction fanzine by James Blish and William H. Miller, Jr.

The Planeteer was released in East Orange, New Jersey, U.S.A. in the 1930s by a 15-year-old Blish. The Associate Editor was William Miller. Six issues of this hektographed fanzine were released, the last issue appearing in April 1936. A seventh issue was later released by Sam Moskowitz (Helios).

Written contributions were by James Blish (including his stories "Bat-Shadow Shroud", "Pursuit into Nowhere", and "Threat from Copernicus"), Burton DuMont, and Lawrence Manning.

James Blish and William Miller corresponded with H. P. Lovecraft, and he sent them a copy of his poem The Wood (The Wood has previously appeared in The Tryout in 1927), which was to appear in September 1936, but the issue was never finished. On a visit to Blish's home in 1937, Sam Moskowitz (Helios) salvaged the remaining pages and released around two dozen copies which he sold at 10 cents each. It contained H.P. Lovecraft's poem, The Wood, the beginning of James Blish story, "Death's Crystal Towers", and art work by Morris Dollens.

In 1936 Miller co-published Phantastique with F. Burton DuMont, and in 1937 Miller joined with John Baltadonis to publish Fantasy Fiction Pictorial.