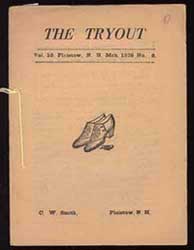 The Tryout was an amateur press publication published by Charles W. Smith from his home at 308 Groveland St. in Haverhill, Massachusetts, U.S.A.

First released in 1914, The Tryout was a National Amateur Press Association publication. Charles Smith had a printing press in a shed in his backyard where he put it together. The publication was noted for its typographical errors, referred to by H.P. Lovecraft as "tryoutisms". The Tryout is noted as the publication that first published many of H. P. Lovecraft's stories, poems and articles, as well as those of others of his circle, including Clark Ashton Smith.

Certain works included in the publication indicated the friendship between the writers, and included the poems To Jonathan Hoag Esq. (Feb 1918) by Lovecraft; Lovecraft: An Appreciation (Apr. 1918) by Arthur Goodenough - with the same year seeing a response in the form of Lovecraft's poem To Arthur Goodenough, Esq (Aug. 1918); and To Mr. Hoag on his Ninety-fourth Birthday, February 10 by Lovecraft.

Also included in The Tryout is a five part history of amateur journalism written by Lovecraft, which began in the February 1920 issue.

Charles Smith (1852-1948) was a correspondent of both Lovecraft and Smith. He kept publishing right up until 2 years before his death.