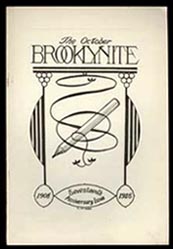 The Brooklynite was an amateur press publication edited by Hazel Pratt Adams (1888-1927).

The Brooklynite was published in Plainfield, New Jersey, U.S.A., and distributed through the United Amateur Press Association. Hazel Adams was a member of The Blue Pencil Club of Brooklyn.

The poems of H. P. Lovecraft were featured in several issues of The Brooklynite. Providence appears in the November 1924 issue. Primavera is in the April 1925, Volume 15, Number 2, and To an Infant in the October issue, Volume 15, Number 4, of the same year. My Favorite Character appeared in the Jan 1926 issue, Volume 16, Number 1. Providence is again included in Volume 17, Number 2 issue of May 1927.

When she passed away in 1927, The Blue Pencil Club issued the publication In memorium, Hazel Pratt Adams, which included the poem, The Absent Leader by Lovecraft, as well as work by Sonia H. Greene, Rheinhart Kleiner, and Samuel Loveman.