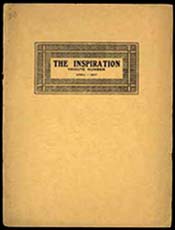 The Inspiration was a literary publication edited by Edna von der Heide for the United Amateur Press Association.

The Inspiration was published in New York, U.S.A. H. P. Lovecraft (The United Co-Operative) was the Associate Editor for the April 1917 issue. It was printed in Lincoln, Massachusetts, by Albert A Sandusky of the Lincoln Press.

The April 1917 issue included the first printing of the poem Brittania Victura by Lovecraft.

After working together on The Inspiration and in the United Amateur Press Association Van der Heide and Lovecraft remained correspondents until his death.

Edna von der Heide, also known as Edna Hyde McDonald, published a number of other amateur press titles, including The Fossil, Bellette, Odium, and many others. As well, she co-published The Convention Mirror with Hazel Pratt Adams (The Brooklynite), Vera Dollman Gonder and Lucie Schneider in September 1923. She was also a contributor to other amateur press publications such as The Brooklynite, The Vagrant, and The Wolverine.