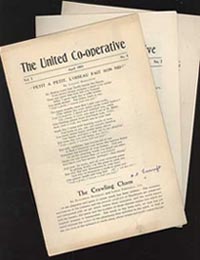 The United Co-Operative was an amateur press publication published in Providence, Rhode Island, U.S.A. under the auspices of the United Amateur Press Association.

The editors were W. Paul Cook (The Vagrant), H. P. Lovecraft, Winifred V. Jackson, Maryetta Lehr, and Rev. J. Clinton Pryor. Maryetta Lehr was not present for the second issue, but they were joined by Philip B. McDonald.

The editors contributed material to each issue, and the first issue is composed entirely of the editors writings.

The weird fiction story, "The Crawling Chaos" by Winifred V. Jordan and H. P. Lovecraft, as "Elizabeth Berkeley and Lewis Theobald, Jun." appeared in the third issue, with other contributions by Eugene B. Kuntz, Samuel Loveman, and Lillian Middleton.

Lovecraft biographer S. T. Joshi writes, "Another idea Lovecraft put forward to encourage amateur activity was the issuing of cooperative papers -- papers in which a number of individuals would pool their resources, both financial and literary. He attempted to teach by example by participating in such a journal, THE UNITED CO-OPERATIVE".