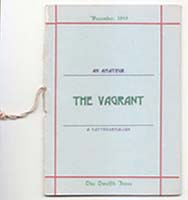 The Vagrant was an amateur press publication published and edited by W. Paul Cook.

W, Paul Cook was partial to work inclined toward the supernatural. After reading H. P. Lovecraft's juvenalia in 1917, Cook encouraged Lovecraft to continue writing fiction. Many of his works were published for the first time in The Vagrant, including "Dagon", for which Cook wrote the critical introduction, "Howard P. Lovecraft's Fiction" (#11, November 1919). The Vagrant also published work by Lovecraft collaborators Anna Helen Crofts and Winifred Virginia Jordan (nee Jackson) (as herself and as 'Elizabeth Berkeley').

W. Paul Cook was one of the publishers, along with H. P. Lovecraft, Winifred V. Jackson, and others, of The United Co-Operative. Later in the 1940s he published The Ghost.

Sean Donnelly provides an excellent account of Cook's life and work as an amateur printer in his book W. Paul Cook: The Wandering Life of a Yankee Printer (Hippocampus Press, 2007).