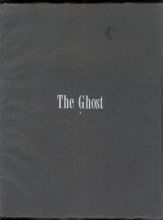 W. Paul Cook was a member of the United Amateur Press Association of the first half of the 1900s and this was his last publication. Earlier publications included The Vagrant. None of the issues of The Ghost were offered for sale, they were privately circulated within Cool's social and literary circles. It was devoted to weird fiction, poetry, essays, articles and in one issue, a play. W. Paul Cook had been an important member of H. P. Lovecraft's inner circle and The Ghost reflects this.

The first issue of The Ghost appeared in Spring 1943. It includes the first printing of the essay "Lovecraft and Benefit Street" by Dorothy C. Walter, and contributions from Ethel Myers.

Issue 2 was published in July 1944 and features "Book of the Dead Chapter 1", "Farnsworth Wright", an article on Farnsworth Wright, Weird Tales by E. Hoffman Price, and The Sphinx, a play by Samuel Loveman.

Issue 3 features "The Weird Tale in English Since 1890", an essay and bibliography by August Derleth, and "The Book of the Dead Chapter 2: Robert E. Howard" by E. Hoffman Price. On pages 55 and 56, in "A Plea For Lovecraft", W. Paul Cook exhorted critics:

"Irreparable harm is being done to Lovecraft by indiscriminate and even unintelligent praise, by lack of unbiased and intelligent criticism, and by a warped sense of what is due him in the way of publication of his works".

Issue 4 was released in July 1946 and is entirely devoted to "Burrowings of an Old Bookworm" by Rheinhart Kleiner.

Five issues were published, the last in July 1947.