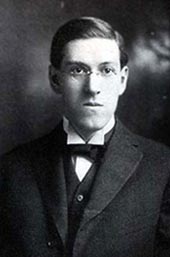 Lovecraft's guiding literary principle was what he termed "cosmicism" or "cosmic horror", the idea that life is incomprehensible to human minds and that the universe is fundamentally alien. Those who genuinely reason, like his protagonists, gamble with sanity. As early as the 1940s, Lovecraft's work had developed a cult following for his Cthulhu Mythos, a series of loosely interconnected fiction featuring a pantheon of humanity-nullifying entities, as well as the Necronomicon, a fictional grimoire of magical rites and forbidden lore. His works were deeply pessimistic and cynical, challenging the values of the Enlightenment, Romanticism, Humanism and Christianity. Lovecraft's protagonists usually achieve the juxtaposition of traditional gnosis and mysticism by momentarily glimpsing the horror of ultimate reality and the abyss.

Although Lovecraft's readership was limited during his life, his reputation has grown over the decades, and he is now regarded as one of the most influential horror writers of the 20th century. According to Joyce Carol Oates, Lovecraft — as with Edgar Allan Poe in the 19th century — has exerted "an incalculable influence on succeeding generations of writers of horror fiction".

Lovecraft was an enthusiastic champion of the amateur press movement, which he participated in for almost 25 years. He was a member of Boston's Hub Club, as well as the editor of The United Amateur for The United Amateur Press Association of America. Lovecraft himself is probably the greatest success story to come out of the amateur journalism movement. Although Lovecraft stopped publishing his own amateur press publication, The Conservative, when he became a professional, he maintained an interest in the aspiring writers of the amateur press and was in contact with many amateur publishers for the rest of his life. The first volume of his collected essays, "Amateur Journalism", is devoted to this interest.

Lovecraft contributed to many fanzines and amateur press publications during his lifetime. His appearances in fanzines continued after his death, as many of his associates and correspondents were fanzine editors, and had either received contributions before his death, or were his collaborators. Other fanzines were devoted to his work and his circle of friends, fellow writers, and correspondents. His presence in science fiction, fantasy and horror fanzines has been continuous since his death, right up to the present day. However, beginning in the 1970s, fanzines considered "Lovecraftian" began to emerge. It was at this time that the Amateur Press Association, or APA, called the Esoteric Order of Dagon began, a quarterly mailing consisting entirely of fanzines devoted to H. P. Lovecraft and his circle. Since then many more fanzines have emerged that unabashedly reference Lovecraft, coming from not just the science fiction, fantasy and horror genres, but also various music genres, such as punk and hardcore, as well as literary and poetry zines. Lovecraft's influence continues unabated among zine publishers.