The International Observer of Science and Science Fiction 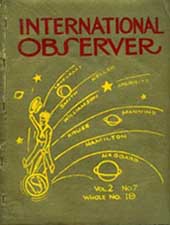 The International Observer of Science and Science Fiction
Issue 19 January 1937
Cover art by John B. Michel

The International Observer of Science and Science Fiction was a fanzine edited by John B. Michel, Frederik Pohl, and Donald Wollheim in the 1930s.

Michel was the chief editor for the first 16 issues (September 1934 to September 1936). Pohl took over the editorship for issues 17 to 20, and Wollheim was the editor for the twenty-first and final issue (June 1937). The Associate Editors were David A. Kyle and Arthur L. Selikowitz. It was published in Long Island City, New York, U.S.A. by William S. Sykora.

In 1937, John B. Michel and Donald Wollheim also co-published the humorous zine Terrible Tales of Tittering Terror, and on his own Wollheim edited The Phantagraph from 1935 to 1946.

Frederik Pohl went on to edit Arcturus in 1938.