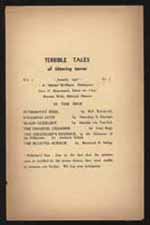 Terrible Tales of Tittering Terror is a fanzine published by John B. Michel and Donald Wollheim in Brooklyn, N.Y., U.S.A.

Terrible Tales of Tittering Tales is a humourous one shot zine consisting of 4 pages, published in January, 1937. It consisted only of a table of contents; according to the "publisher's note", the "printers were so terrified by the stories therein, they were unable to continue any further".

Donald Wollheim also published The Phantagraph, and both Wollheim and John Michel were co-editors, along with Frederik Pohl, of The International Observer of Science and Science Fiction.