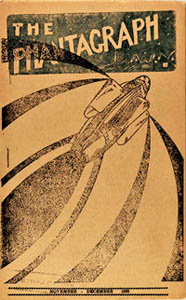 The Phantagraph was an amateur magazine from the 1930s and 1940s published by Wollheim and Shepherd in New York, U.S.A. and edited by Donald Wollheim.

The Phantagraph was the retitled continuation of Wilson Shepherd's club magazine, The International Science Fiction Guild's Bulletin, a 4 page hektographed publication which first appeared in May of 1934. In July-August 1935 the first issue edited by Wollheim appeared, and this same issue was also the first printed issue which was produced by amateur publisher William Crawford. The Phantagraph was printed from typeset copy on wood pulp paper and stapled. The final issue was Volume 16, Number 1, released in February, 1946. As of the May 1940 issue, it was distributed through the Fantasy Amateur Press Association.

During the 1930s, Donald Wolheim also co-edited Terrible Tales of Tittering Terror with John B. Michel, and The International Observer with co-editors John B. Michel and Frederick Pohl.