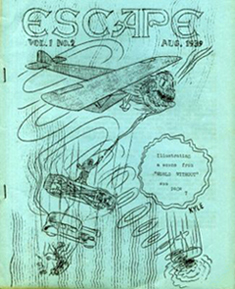 Escape was a science fiction fanzine by Richard 'Dick' Wilson.

Escape was published in the late 1930s in Brooklyn, New York, U.S.A. Because there were no titles beginning with the letter "E' in the Swisher S-F Check-List of Science Fiction fanzines, Wilson created Escape to remedy the situation. Volume 1, No. 2 was published in 1939. and Vol. No. 3 in September 1939.

Contributions of writing included Cyril Kornbluth, whose first solo story, "The Rocket of 1955" appeared in Vol. 1 No. 2., "Of Mags and Men" by Frederik Pohl and Cyril Kornbluth, writing as 'P.B. Gottesman', "Slight Miscalculation" by Harry Warner, Jr. (Spaceways), and "The Old Order Changeth" by Dirk Wylie.

Contributors of artwork included David Kyle, among others.

Escape was reviewed in the January 1940 issue of Startling Stories.

Richard Wilson went on to win the Nebula Award for his science fiction writing.