The Reader and Collector 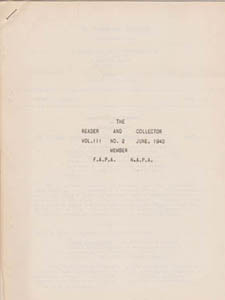 Twenty issues were published between 1938 and 1946. It was letter-sized, mimeographed and stapled, ranging from 5 to 22 pages. H. C. Koenig stated that the major influence for publishing the "journal of literary comment" came from his late friend and fellow Kalem Club member, H. P. Lovecraft.

The June 1944 issue of The Reader and Collector was devoted to the British fantasy writer William Hope Hodgson (1871-1918). Koenig's efforts on behalf of Hodgson's writings, beginning in the early 1930s, led to the widespread publication of his works in the U.S. When the omnibus book The House on the Borderland and Other Novels was published by Arkham House in 1946, Koenig was asked to write the Introduction.