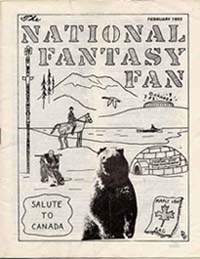 The National Fantasy Fan Federation is a science fiction and fantasy society based in the U.S.A. that began in 1941, and the same year began publishing its official organ, Bonfire. Louis Russell Chauvenet is credited with naming the fanzine, and was actively involved in the formation of NFFF, serving as its first president. Approximately fifteen issues in total were released as Bonfire between its beginnings in June 1941 and the final issue of December 1944, at which point the name of the fanzine was changed and it became The National Fantasy Fan.

The National Fantasy Fan was published continually from 1944 till 2009, with many different editors at the helm over the many decades it has been released. The editors have included:

Reviews have been contributed by John Boston, Mike Deckinger, and Susan Magnus.