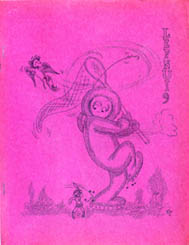 Lefnui was a science fiction fanzine by Fred Patten.

Lefnui was produced in Los Angeles, California, U.S.A. and distributed by Offtrails Magazine Publishers Association in the UK. The first issue appeared in November 1963, and the last issue, issue 9, was released in June 1969.

Fred Patten was one of the editors of Shangri L'Affaires, for the year 1961, and put out the 7th and final issue of Ipso Facto in 1963. He also published the fanzines Salamander, Foofaraw, and the long running apazine Rabanos Radiactivos! for APA-L, for which he produced 2279 issues, and was included in every mailing from 1964 till 2009. He belonged to the Apa devoted to comic books, CAPA-alpha, for which he produced Heavy Water, and was the Official Editor of Rowrbrazzle from February 1989 till February 2005, as well as writing a column for Yarf!. He also founded Cerebus the Newsletter in 1981, editing the first 5 issues.

He is the author of Watching Anime, Reading Manga: 25 Years of Essays and Reviews, as well as a number of anthologies, and one of the founder of the Down Under Fan Fund, promoting visits between Australia and New Zealand and North America.