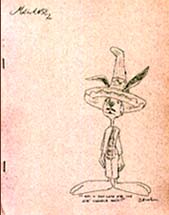 Melange was a science fiction fanzine by Bjo Trimble and John Trimble.

Melange was published in Los Angeles, California U.S.A., in the 1960s. Eight issues of this title appeared, with issue #2 released in February 1960 and the last issue, #8, published in 1965. It contained commentary, reviews and opinions from the editors. It was an 8 1/2 X 11 inch fanzine of around 20 pages.

Later in the 1960s, Bjo and John Trimble published Pas-Tell.