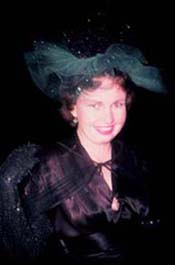 Bjo Trimble (nee Wells) is a fanzine editor and artist.

She first encountered science fiction fandom as Bjo Wells at ChiCon, the 1952 World SF Convention in Chicago. As Arnie Katz relates the story, she didn't like what she saw and was headed out the door when she ran into Shelby Vick, editor of Confusion, who soon changed her opinion of the event now that she had found a friendly face.

By the late 1950s, she had brought together a group of LASFS members to form a repertory company called Unicorn Productions which made two fan films for conventions written by Lee Jacobs, called The Genie in which she co-starred with Forrest J Ackerman, and Fritz Leiber, and The Musquite Kid Rides Again, based on a story from Lee Jacobs' fanzine The Ballard Chronicles, in which she costarred with husband John Trimble, Karen Anderson, Charles Burbee, Terry Carr, Jim Caughran, Dean Dickensheet, Ingrid Fritsch, Jack Harness, Ted Johnstone, Robert Lichtman, Bruce Pelz, Ernie Wheatley, and Ron Ellik as 'The Musquite Kid'. In 1979, she appeared in a uncredited role as a crew member in the movie Star Trek: The Motion Picture, and in 1981 in the short film Superbman: The Other Movie.

Her first involvement with fanzines came when she and husband John Trimble began co-editing Shangri L'Affaires, the official publication for the Los Angeles Science Fantasy Society (LASFS), for the years 1960 and 1961.

In 1960, Bjo Trimble initiated and directed "Project Art Show", the first art show to be included at a science fiction convention. It was in connection to promoting these art shows that she released her International Science Fantasy Art Exhibition Bulletin fanzine. Contributing artists to "Project Art Show" included Karen Anderson, George Barr, Cynthia Goldstone and Don Simpson. "Project Art Show" was a success, and lead to art shows becoming a regular feature at conventions.

In March 1961, she released Bjottings through Offtrails Magazine Publishers Association.

Bjo was also regularly contributing illustrations and cartoons for a number of fanzines, as well as covers, throughout the 1950s and 1960s.

She is probably now best known for her involvement in Star Trek fandom. She contributing to one of the first Star Trek fanzines, ST-Phile, during the original boradcast of the television series and, when the series was threatened with cancellation, orchestrating the successful letter writing campaign with husband John Trimble to keep the show on the air.