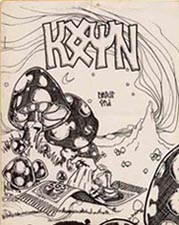 Rune is a science fiction fanzine published by The Minnesota Science Fiction Society.

The editors of Rune for 1973 were Chuck Holst and Bev Swanson. The editor in 1974 was Don Blyly (February 1974, #35), and Bev Swanson and from 1974 till 1976 was Fred Haskell, for issues 39 - 48, with David Emerson as editor for two issues. Lee Pelton and Carol Kennedy were the editors from 1978-1980. In the early 1980s, editorship alternated between John Bartelt, Garth Danielson, Karen Trego, David Stever, and Joe Wesson. by 1986 M.K. Digre and Eric Biever were co-editors, succeeded by Michael Butler; then Jeanne Mealy and David E Romm from 1987 to 1991. in the 1990s, the editorship rotated between Garth Danielson, December; Ken Fletcher, March; Tom Juntunen, June; Jeff Schalles, September. The clubzine was published very sporadically after the early 1990s, with Rune #85 coming out in March 1995, and #86 in March, 2002. In 2012, Matthew Strait and Kelly Strait revived Rune, becoming editors and publishing #87 that October.

Included also were reprints of speeches by Ted Johnstone, with illustrations by Bjo Trimble.

In The Proper Boskonian, Bob Devney said in his review, "Rune 85 is warm, informative, and silly. I like that in a fanzine."

Jeff Schalles was also one of the Guest Editors and publishers of Science Fiction Five Yearly.