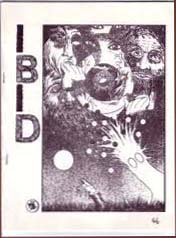 Ibid was distributed through the Esoteric Order of Dagon, an APA (Amateur Press Association) devoted to H. P. Lovecraft.

Included in Ibid were essays by Indick, including "The Children of Ahasuerus", and "Lovecraft's Ladies", which has been reprinted several times since the first printing in this publication, and "Ray Bradbury the Dramatist", later expanded into the book published by Borgo.

Also included was fiction such as "Maeve By Moonlight".

Indick also presented for the first time in print an overlooked essay by H.P. Lovecraft.