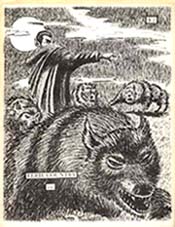 Eerie Country is a horror and weird fiction fanzine by W. Paul Ganley.

In the 1950s, Ganley had published the science fiction fanzine Fan-Fare. He returned to publishing in the 1970s with the release of Eerie Country, devoted to weird fiction, suspense and horror stories, and poetry. Published in Buffalo, New York, U.S.A., nine issues were released, the first issue appeared in 1976, and the last in 1982.

Two stories first published in Erie Country, "The Light at Curry's Point" by Ernest Johnson and "Music of the Void" by William H. Stout are considered part of the Cthulhu Mythos.