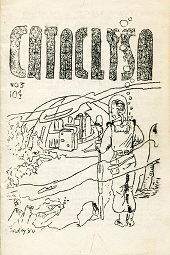 The introduction to the August 1954 issue states: "This is the ninth issue of Cataclysm. And the last. The preceding eight issues appreared from a variety of publishers at irregular intervals over the course of the last four years. When the magazine started, Del Close was the co-editor and chief instigator; he has since dropped out of circulation altogether.... He put out the first two issues. The third issue was published by W. Paul Ganley.... With the fourth issue, we took on Jim Bradley as Art Editor and publisher; then he, too, dropped out of fandom.... With the seventh issue, we turned the production end over to Brian McNaughton, who managed to publish two issues before being torn forcibly away from the mimeograph. That was over a year ago.... Then came Marion, and here at last is Cataclysm."

Art work was by Jim Bradley (Destiny, The Comic Collector's News), among others.