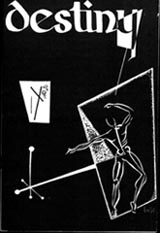 The first fanzine that Jim Bradley and Malcolm Willits published was called The Comic Collector's News, in 1947. It is regarded as the first fanzine devoted only to comics. However, after a couple of years they abandoned it in favor of a fanzine devoted to science fiction, which they called Destiny. The first issue appeared in 1950. Ten issues of this title were published, the last in Summer 1954. Later, Bradley left and Earl Kemp came in as co-editor.