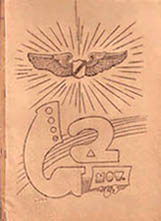 G2 was a science fiction fanzine by Joe Gibson and Robbie Gibson.

Letters came from Poul Anderson and Harry Warner, Jr. (Horizons), among others.

Joe Gibson, originally from Albuquerque, New Mexico, was a science fiction writer who was writing for pulp magazines such as Thrilling Wonder Stories, Amazing Stories, and Science Fiction Quarterly during the 1940s, until he went off to fight in WW II, but resumed writing in the 1950s, writing for Other Worlds and Galaxy, and produced such books as Shadow on the Moon, which was re-released in April 2011 by Armchair Fiction.

He had begun contributing to fanzines, such as Spectra, by Arthur Joquel, in the 1940s, and Inside and The Pendulum in the 1950s. In 1955, he and Roberta Collins married but it wasn't till ten years later that they would decide to do a fanzine together, and G2 would come into being.

Along with G2, Joe Gibson also released the fanzine The Damned Patrol, organized for SF fans who were also interested in aviation. John Berry (Pot Pourri), Terry Jeeves (ERG), and Beryl Mercer (Link, Oz) were his co-editors for five issues of this U.S.A. - UK joint release.

Harry Warner, Jr., in his article "In One Lustrum and Out the Other" for Science Fiction Five Yearly # 6 of November 1976 writes, "There's the May, 1966, issue of G2 causing me to wonder if Joe Gibson will come up for the third time. He was quite active in the 1940's, vanished for a long while, then reappeared in the 1960's to put out lots of issues of this fanzine with the help of his wife, only to gafiate a second time as abruptly and totally as anyone ever has quit fandom. He just decided that he was more interested in old airplanes than in fandom, as far as I could determine."

Roberta "Robbie" Gibson is the Godmother of Earl Terry Kemp, son of Earl Kemp, editor of Destiny and el.