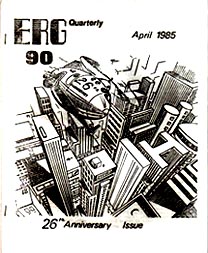 ERG was Terry's own personal fanzine and was produced on an old duplicator. ERG was always filled with Terry's illustration, which he handcut into the duplicator's wax stencils. The quality of the illustrations produced by others using the same medium was rarely matched.

ERG was published from April 1959 til 2005. 166 issues were released. It was distributed by Offtrails Magazine Publishers Association, while this amateur press association existed. The last issue appeared in 2004.

Contributors of art work included Eddy Dean, and Michael Rodan, among others.

Terry Jeeves was a major force in founding the British Science Fiction Association in 1958, and was responsible for naming the club zine, Vector, and created the art work for the first cover, as well as being one of the editors for 1958-1959. He was also co-editor of Triode with Eric Bentcliffe, and one of the editors of The Damned Patrol, along with Joe Gibson (G2), John Berry (Pot Pourri), and Beryl Mercer (Link, Oz).

Terry Jeeves won the Rotsler Award for fanzine artists in 2007 and was inducted into the First Fandom Hall of Fame in 2010.