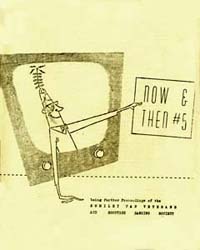 Now & Then was a science fiction fanzine by Harry Turner and Eric Needham.

The first issue was released in August 1954, subtitled, "Being the proceedings of the Romiley Fan Veterans & Scottish Dancing Society". It was filled with absurd fan fiction stories, and puns, poems, and other word play of a surrealistic nature.

Issue two appeared November 1954 with more fan fiction and the the addition of advertisements for "Widower's", a fictitious department store, sardonic mock ads on the black humour side, such as this example from Eric Needham:
Judas hanged himself from a bough
A curious use for trees...
What use to perish, no more to cherish
WIDOWERS WONDERFUL PEAS
Letters came from Ken and Pamela Bulmer and Sid Birchby.

Issue three arrived in 1955, this time with an illustration by Pat Patterson and written contributions by Sid Birchby, Robert Bloch, and Pat Darroll, and the usual fan fiction. However, with this issue each page featured beautiful 1950s illustrations by Harry Turner, along with the one mentioned by Pat Patterson. Also with this issue, Now & Then began to be distributed with Offtrails Magazine Publishers Association mailings.

The next issue was called a "Recap for Latecomers", with reprints of material from all the previous issues, plus a reprint of a poem by Eric Needham that was originally in Scottishe.

January 1957 was issue 8 arrive with a cover and illustrations by Pat Patterson Lyons. The theme for this issue was 'Ergonomics'.

Issue 9 was intended to be the "Homes and Gardens" issue ofNow & Then, but it remained unpublished until it was eventually released along with Hyphen Issue 25. The contributors were John Berry, Robert Bloch, Paul Enever (Orion) and Dean Grennell.

Harry Turner had previously published the fanzine Zenith in the 1940s.