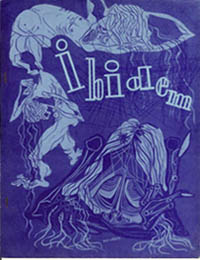 Ibidem was a science fiction fanzine by P. Howard Lyons.

Ibidem was published in Toronto, Ontario, Canada during the 1950s. P. Howard Lyons was a member of "The Derelict Insurgents", a group of science fiction fans associated with the fanzine Canadian Fandom.

Art Editor and Director is Pat Lyons, also known as Pat Patterson. whose artwork can be seen in many of the fanzines of this period of the 1950s, including A Bas, Canadian Fandom and Inside and Science Fiction Advertiser.

Issue 3 of Ibidem was distributed by the Offtrails Magazine Publishers Association. Six issues were published.

Ibidem was also the title of a fanzine by P. Howard Lyons that he began publishing at the same time, but that ran for much longer, having to do with stage magic.