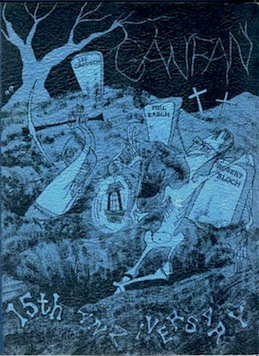 Canadian Fandom was published by Taylor in the 1940's in Toronto, Ontario, Canada. It was one of the earliest SF fanzines published in Canada. It was originally called Eightball, but its name was changed by the editor after the fourth issue.

Albert A. Betts contributed cover art to many issues, alternating with Nils Helmer Frome, and Bob Gibson and Jack Sloan contributed comics. The cover of issue four was by Virginia Anderson (a.k.a. Hyacinthe Hill).

During this time,Canadian Fandom began to be distributed by the Canadian Amateur Fan Publishers.

Taylor also sponsored fandom meetings in Toronto, which Croutch also attended. In the late 1940's, these fans became organized into a committee to help prepare for the first Canadian Worldcon, a conference of Science Fiction fans hosted by a different city each year. This group called themselves "The Derelicts", and included Taylor, Ed McKeown, John Millard, Bill Grant, and Jack Doherty and Don Hutchinson, editors of Macabre. After Worldcon, Taylor handed over editorship of Canadian Fandom to fellow committee member Ed McKeown in 1949.

McKeown published two more issues of the fanzine before handing over editorship to a new member of The Toronto Derelicts, Gerald Stewart. Steward brought with him to the zine friends P. Howard Lyons and Ken Hall, as well as Pat Patterson, Boyd Raeburn and Ron Kidder. They were known for their liking of Beat poetry, jazz, leather jackets and fast cars, aside from all being fanzine editors, writers and artists. To differentiate themselves from the previous group of Toronto fans, this new group called themselves 'The Derelict Insurgents'. Shortly after Steward began editing Canadian Fandom, P. Howard Lyons and Pat Patterson Lyons join forces to produce Ibidem, Raeburn began A Bas, and Steward was also publishing Gasp!.

In the mid 1950s Steward passed the zine onto Bill Grant who shortened the name to CanFan.

The last issue was published in 1957, with the 15th annual of Canadian Fandom.