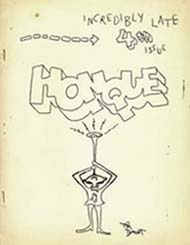 Honque was a fanzine published by Norm Clarke and Gina Ellis Clark in Ottawa, Ontario, Canada.

Art work was contributed by Tim Dumont, and Steve Stiles, among others.

Norm Clark and Gina Ellis (Clark) edited a fanzine that made up in non-stop hilarity what it may have lacked in refined and slick appearance. Norm's lurid tales of 'skree-honking' and the fine writing of both Gina and Boyd Raeburn guaranteed a good read, liberally punctuated by laughter.

Five issues were released. In 1967, Norm Clarke was nominated for a Hugo Award for Best Fan Writer.

Norm and Gina Clark also did the fanzines Descant, and Queebshots, with Boyd Raeburn.