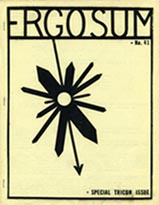 Ergo Sum was published in the 1970s in Ottawa, Ontario, Canada. It had previously been named Differential, and under that name 37 issues had been published, from September 1962 till August 1965, After a break the editor began publishing again, with the new name but retaining the same numbering of issues, so that the first issue of Ergo Sum was #38. The last issue was #41.

Paul Wyszkowski was a fan for several decades, contributing to Norman Browne's Vanations in the 1950s and, in the 1960s, to Norman Clarke and Gina Ellis Clarke's Honque. Later in the 1970s, he did an apazine called Blind Starling.