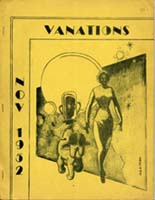 Norman Browne had previously started the Vancouver SF Club in Vancouver, B.C., and had co-edited the club's fanzine Hibited Happenings for three issues. He was midway through producing the first issue of his own fanzine and had printed the cover, with photographs by Frank Stephens, in Vancouver, when he moved to Edmonton, where the rest of the issue was produced.

Contributions included a one act play, The Tree, by Fred Chappell, which appeared in issue 5.