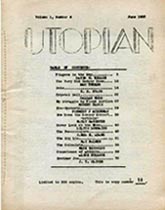 Utopian was an amateur press publication released by R.J. Banks in the 1950s in the U.S.A.

Utopian was a side sewn mimeographed fanzine published in a limited signed and numbered edition of usually 300 copies, in Corsicana, Texas, U.S.A.

The editor made a point of including fiction in Utopian at a time when many fanzines were becoming reluctant to do so. He felt new writers needed encouragement. Lists of fans were also included in the zine for the purpose of networking.