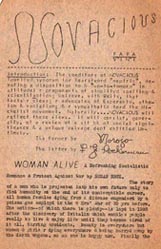 In the first issue, the two co-editors declared themselves to be in favor of simplified spelling and scientiaction; Esperanto; and aetheism, socialism, and Michelism, and that Novacious would reflect these views.

One issue featured the transcription of Robert A. Heinlein's Guest of Honor speech, "The Discovery of the Future" which he deliverd at "Denvention", the 2rd World Science Fiction Convention in Denver, Colorado, July 4, 1941. It had been recorded on disc by Walter Daugherty, and transcribed for Novacious. This issue was released in an edition of 200 copies, with a reprint of 100 copies.

Myrtle Douglas and Forrest J Ackerman also published Voice of the Imagi-Nation. As well, Myrtle Douglas had released Stephan the STFan for the occasion of the First World Science Fiction Convention in 1939, and regularly published her own title Guteto.