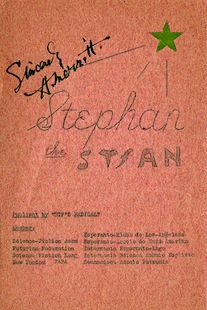 Stephan the STfan was a science fiction fanzine by Myrtle Douglas, known in Science Fiction and Esperanto communities as Morojo.

Released in 1939 in the U.S.A. for the occasion of the first World Science Fiction Convention, this was a small pamphlet of approximately six pages which Morojo called her "Conmag".

It included an introduction by Morojo and the short story "Penned Names" by Harry Warner, Jr., which discusses the signatures of science fictions writers, fanzine editors and fans. Warner has written the article in his version of "Ackermanese", as a spoof on Forest J Ackerman's style of writing and speech.

The fanzine leaves blank pages so that attendees could gather the signatures of their fellow convention goers.

Myrtle Douglas also published the fanzine Guteto from 1941 till 1958. With Forest J Ackerman, she co-published Imagination!, Voice of the Imagi-Nation, and Novacious.