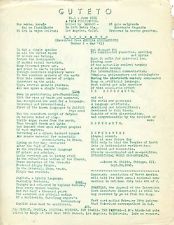 Guteto was a science fiction fanzine by Myrtle Douglas (Morojo).

Guteto was published in Los Angeles, California, U.S.A. and was distributed by the Fantasy Amateur Press Association. Guteto was a vehicle for Myrtle to advance the cause of Esperanto, the 'universal language', 'guteto' being the Esperanto word for 'droplet'.

The first issue of Guteto was published in June 1941, and mentioned that same month in Futurian War Digest. It featured the poem Esperanto by Boone M. Childs, excerpted from the publication Amerika Esperantisto #6 of March 1941. Myrtle continued publishing her fanzine up to Volume 4, number 7, released in March 1958.

Myrtle Douglas had previously published the fanzine Stephan the STFan for the occasion of the First World Science Fiction Convention in 1939; she also co-published Voice of the Imagi-Nation and Novacious with Forrest J Ackerman.